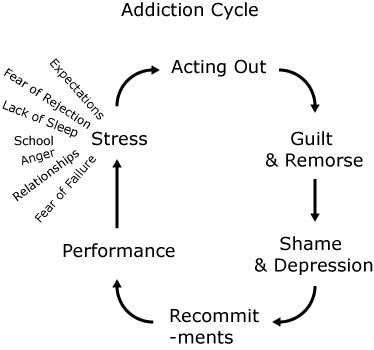 Posted at 15:14h in Sex Addiction by elana 0 Comments 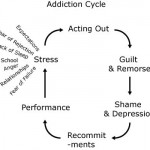 Carnes says those who are addicted to sex have negative core beliefs hidden in their unconscious.  These core beliefs might be one of the four, “I’m not good enough,” “I can’t trust others to meet my needs,” “they wouldn’t like me if they really know who I am,” and “sex is my most important need.”  These core beliefs affect the way one thinks about themselves on a daily basis.  One’s automatic thoughts may be riddled with thoughts that are born from core beliefs buried in the unconscious.  An individual who is overwhelmed by critical thoughts of themselves and others may began to attach to thoughts that give them an escape.  These thoughts turn into a preoccupation.  One will stay in thought about what he or she plans to do to get relief.  These thoughts build up causing a high level of stress on the body.

After having a period of preoccupation, one will turn to rituals.  Rituals are constant patterns of behaviors performed prior to acting out sexually, driven by preoccupation.  Rituals allow one to control the environment before acting out. Examples of rituals might be feeding the dogs in order not to be disturbed, choosing a specific time of day or preparing one’s physical appearance before acting out.

Once one has acted out her or his specific addictive sexual behavior (chronic masturbation, anonymous sex, and etc.) there will be an overwhelming feeling of shame  and guilt.  One might promise herself she will never act out like that again.  She may beat herself up in her mind that she can never do it again.  She is begins to list all the people and things she will lose if she acts out sexually in this manner again.  The results of acting out feed back into the negative beliefs and thoughts this individual already has towards herself.  The vicious cycle continues.  Until one chooses to stop.