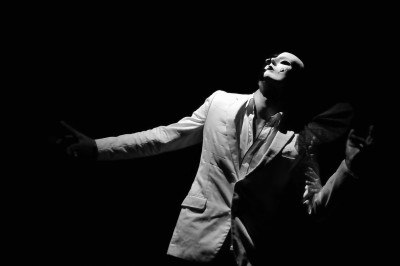 26 Oct Are You an Anxious Actor? Here are Some Ways to Deal!

This blog post was written by Amy Margolis, Registered MSW.

I have been an actress for 20 years and am finally at a place now where I don’t get nervous, just get excited. It could be that I am in my “magical 40s,” when your looks start to fade and your self esteem starts to soar. But I would rather think it is because I have learned what works for me. Here are four pointers that really help me and hopefully can help you, too!

Years ago, I booked my first guest spot on a TV show in New York. I was a second year Meisner student, so this was a dream come true. I should have been on top of the world, but instead I was in the shitter. I spent the entire day before the shoot feeling fat, ugly, and not enough. This spell of “shame head” was a mystery to me until I saw it rise up again when I booked my next big gig. I began to realize that the voice of my inner critic was really fear! I asked myself, “What is the pay off in thinking like this?” The answer was, “This negative thinking protected me from failure. If I already felt “not good enough” I wouldn’t be so disappointed if I was rejected.” I began to dialogue with your my inner critic in my journal. Think of your confident actor, who wants success, as your grown up self and your inner critic as you scared little kid. I know when I do dialogue between the two I come to a place of feeling integrated and whole and ready to go!

Pursuing acting is a solitary pursuit and most actors that are any good are vulnerable and highly sensitive. I recommend finding “your people.” There are so many options. You could take an acting class and build friendships with other actors there. You could go to a therapy group or join an artists support group. Having other friends, who are in the same boat, is invaluable. You can empathize, commiserate and cheer each other on. When I have a big audition, show or booking, I love to “book end it.” I call another actor before the audition and set the intention to own my talent, be present and do a great job. Then I make a follow up call when I am finished so I don’t have to be alone with whatever happened.

When you are called in to audition or perform a role, many times the direction will say… “think Ellen Degeneres” or “a Robert Downey Jr type.” Do not get thrown off by this. The casting people do not want you to imitate these celebrities. They are looking for an essence. So if Ellen Degeneres is wry and deadpan, what does that look like on you? I once saw an interview with Oprah Winfrey. She said early in her career as a journalist she would imitate Barbara Walters, who at the time was the epitome of journalistic success. It wasn’t until Oprah flubbed her lines and cracked a joke on the air that her ratings started to soar. Seeing this she began to be herself and look at her now! If you are talented enough to get the audition, bring what you are strongest at… being you!

If you are like many actors, you swing from high to low and you think in black and white. For example, “The way my life looks today is the way it will always look. This is too

hard!” That could not be further from the truth. The exciting part about being an actor is your life could change in a moment. As a young actor in NYC I was focused solely on voice overs and for three years. I was working full time as an adoptions social worker and cramming in voice over auditions three times a week. I booked one local commercial, which paid crap, and thought, “is this worth it?” I was so ready to throw in the towel. Then it happened. I booked a national TV campaign that ran for 11 years and paid an annual salary of $70,000 for 12 hours of work. The bottom line is an acting career takes patience, persistence and perseverance. If God puts a dream in your heart and gives you some talent, it is your job to nurture it and keep on keeping on!